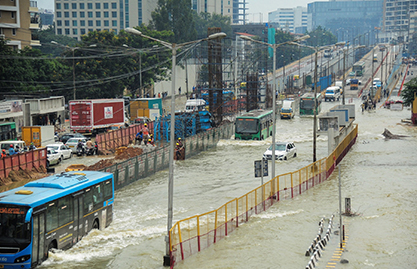 How Can We Shape Flood-Resilient Cities

The India Meteorological Department (IMD) recorded 7% surplus rainfall during Monsoon in India this year, which left many cities submerged. Earlier, only rural areas and unplanned cities fell prey to floods because of the lack of proper stormwater infrastructure. Today, planned cities face the same fate despite being designed to prevent such catastrophes. In India, the recent floods uncovered the actual state of infrastructure in cities like Bangalore and Gurugram. The situation has also raised serious concerns about the planning and infrastructure capacity of many seemingly developed cities.

With similar events becoming a common occurrence, how can we move towards shaping flood - resilient cities? Here are some incremental ways that can help mitigate floods:

When rainfall exceeds the expected trends, an inadequate drainage design becomes incapable of catering to the situation. Therefore, the primary reason for flooding in cities is the absence of robust stormwater drainage. For systematic run - off, the water should be directed through a planned network of stormwater drains designed to suit regional rainfall patterns.

Rapid urbanisation has reduced green cover in cities like Bangal ore and Gurugram. With the depletion of natural vegetation, the water run - off patterns are altered due to non - permeable hard surfaces like roads, pavements, plazas, etc., compromising groundwater percolation. Therefore, public spaces can have substantial p erforations in the form of green spaces and soil cover that allow for water seepage and prevent overflow

Generally, building roofs catch rainwater which is diverted to drains and contribute to the overflowing water in the streets. Green roofs can also help lessen this problem by absorbing up to 80 percent of the rain that falls onto them.

Several strategies can be adopted at a neighbourhood level to mitigate the effect of flooding. For example, on a local level, parks can have a better landscape design with water bodies wherein features like ponds act as natural water cat chments in monsoons. Moreover, Monsoon rainwater run - offs can be harnessed to conserve this water with the help of reservoirs and bioswales. Such a planned water channel network doesn’t just prevent flooding but can also help save water for potable use.

The city of Bangalore is home to many natural and man - made water bodies. Human disturbance of such water bodies, like lakes, ponds, rivers, etc., is also a major reason for flooding in urban areas. Building activities and encroachment on river banks disturb these water bodies b y introducing hard surfaces, which hinder the water seepage. Such actions are one of the significant causes of overflowing rivers during monsoon season.

This problem can be addressed on an urban scale. For example, if a river runs on a city's outskirts, interventions can enable protection from flooding by water diversions like streams, canals, etc. If a water body exists within a city, an interface between the city and the river can be created by constructing embankments. Spillover r eservoirs are also built as an alternative for taking up surplus water during heavy rains.